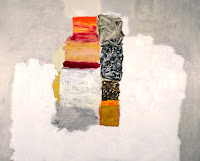 Posted by Maggie at 8:06 AM No comments:

No good explanation for my absence here. Sometimes life just gets away from me and so things that were important start to vanish over the horizon, replaced by a meaningless busy-ness that seem unavoidable.
Continuing my love/hate relationship with writing, I have covered several reviews for BurnAway and ArtsATL in the past few months. I also interviewed Lauri Stallings for Art Papers on-line publication as she was preparing to spend the summer in Central Park with glo. And wrote a piece about a fun collaboration among painters, Triple Play at Marcia Wood. That was for  Art Papers also. The reviews enable me to really dig into an an artists work which I enjoy very much. Spending hours thinking about the work and researching the artists beyond a show gives me a much deeper appreciation for the artist's journey. Here are the links: Alex Katz at the High Museum; Michi Meko at Alan Avery; Martha Whittington at Dashboard Co-op.
Posted by Maggie at 2:41 PM No comments:

Just published review of Jim Waters exhibition at the High Museum. Lots of sparkle, lots of fugitive light and plenty to wonder about. Check it out at http://burnaway.org/jim-waters-conductor-light-high-museum/

Love the way this sparkly organic form seems to grow and glow like a life form. With our eyes glued to the digital world of a smart phone or tablet we forget the microcosm in a drop of water. Waters is here to tell us about it. Exhibition runs through June 8 at the High Museum.

Julie Mehretu at the High Museum

Julie will be speaking at the Alliance Theater on Monday, April 21 at 7 p.m. Mehretu is an internationally recognized artist who has been interrogating painting and its ability to respond the chaotic conditions of the contemporary world.

In 2009 I wrote a paper while a PhD student at the Institute for Doctoral Studies in Visual Art about Mehretu and the contemporary sublime. I suggested that in her early paintings such as Stadia I and Stadia II she was posing a collision of spatial systems that mimed the clashes between social behavior represented by organic mark-making and the institutional represented by architectural drawings of structures of power. I argued that the friction between these two systems produced a third space of potentiality, where something new can emerge from the chaos.

The High Museum of Art acquired one of the paintings in a cycle called Mogamma (A Painting in Four Parts)  last spring. As a synopsis of the unpublished paper I wrote an essay for Burnaway.org that discusses these ideas in relation to the museum's acquisition of Part 2 in the cycle. The essay will be published on April 18.

Posted by Maggie at 6:22 AM No comments:

Halleluia! I just finished a nomination award application. It took several days of long hours to respond to questions about my work, challenges to gaining access for my work, and what I would do with 25K!  I submitted 20 images spanning 30 years of art making and explained the significance of each turning point in my work in less that 300 words. That's why it took so long.


Describe the nature of your work, its content and/or meaning including how it has evolved over time and what technical, cultural or other details will aid in its understanding.

In the early 1980’s the mark became a significant aspect of my process. As content, the mark represents an affirmation of being, an awakening to wonder and a record of consciousness.  It is a persistent concept through the various investigations in my practice.
Following a residency with Miriam Shapiro in 1983, I began a brief investigation of identity with the figure as a subject. Vigorous charcoal marks on large sheets of paper surround an anonymous female figure grappling with an inherited hierarchy.  The drawings visualized my claim to identity as an artist.(1-3) 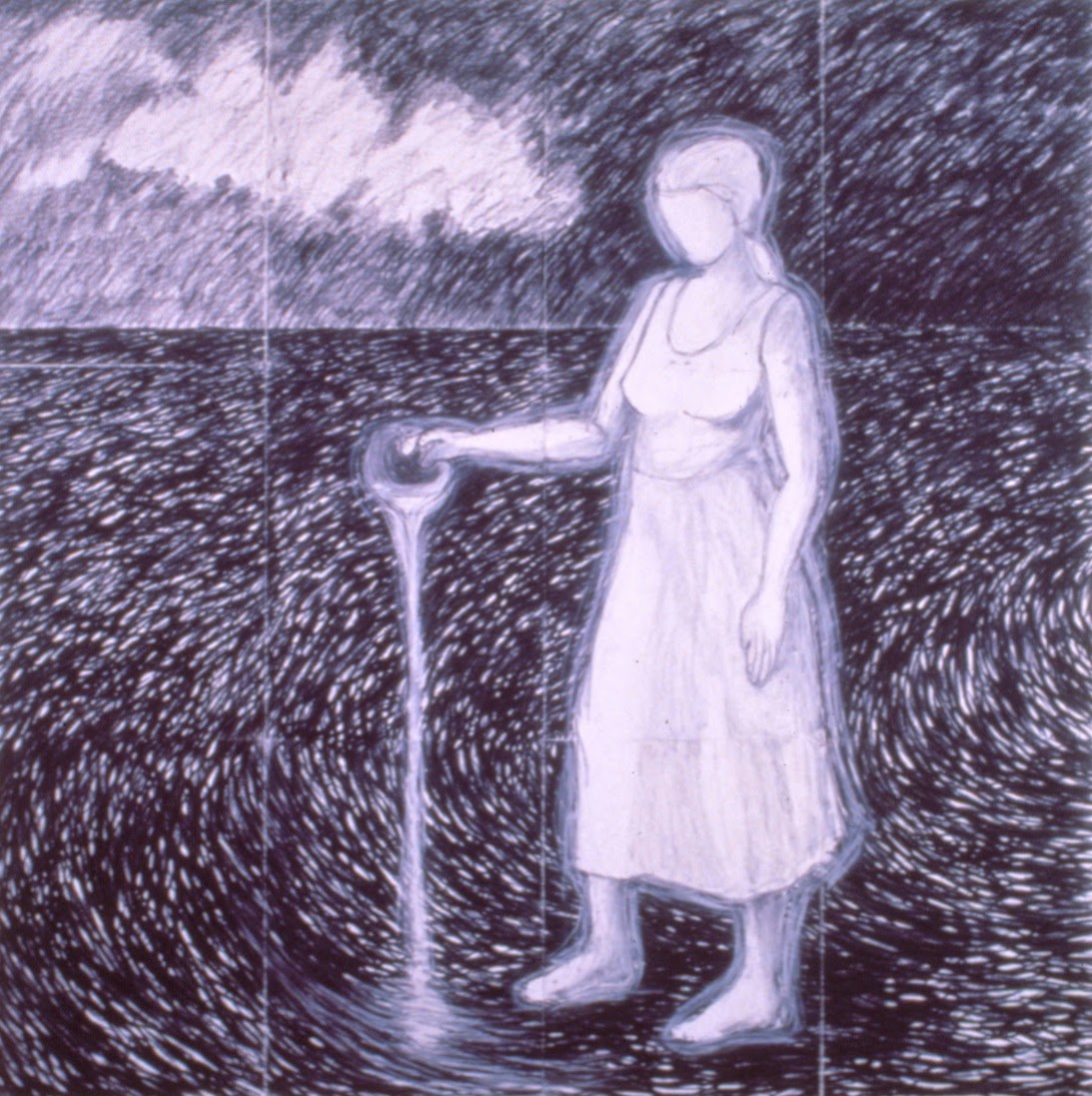 In 1990 the endangered Florida Everglades renewed my interest in landscape as content. The mark articulated the infinite and lively expanse of the Everglades while a black pool and red sky suggests finitude. (4) 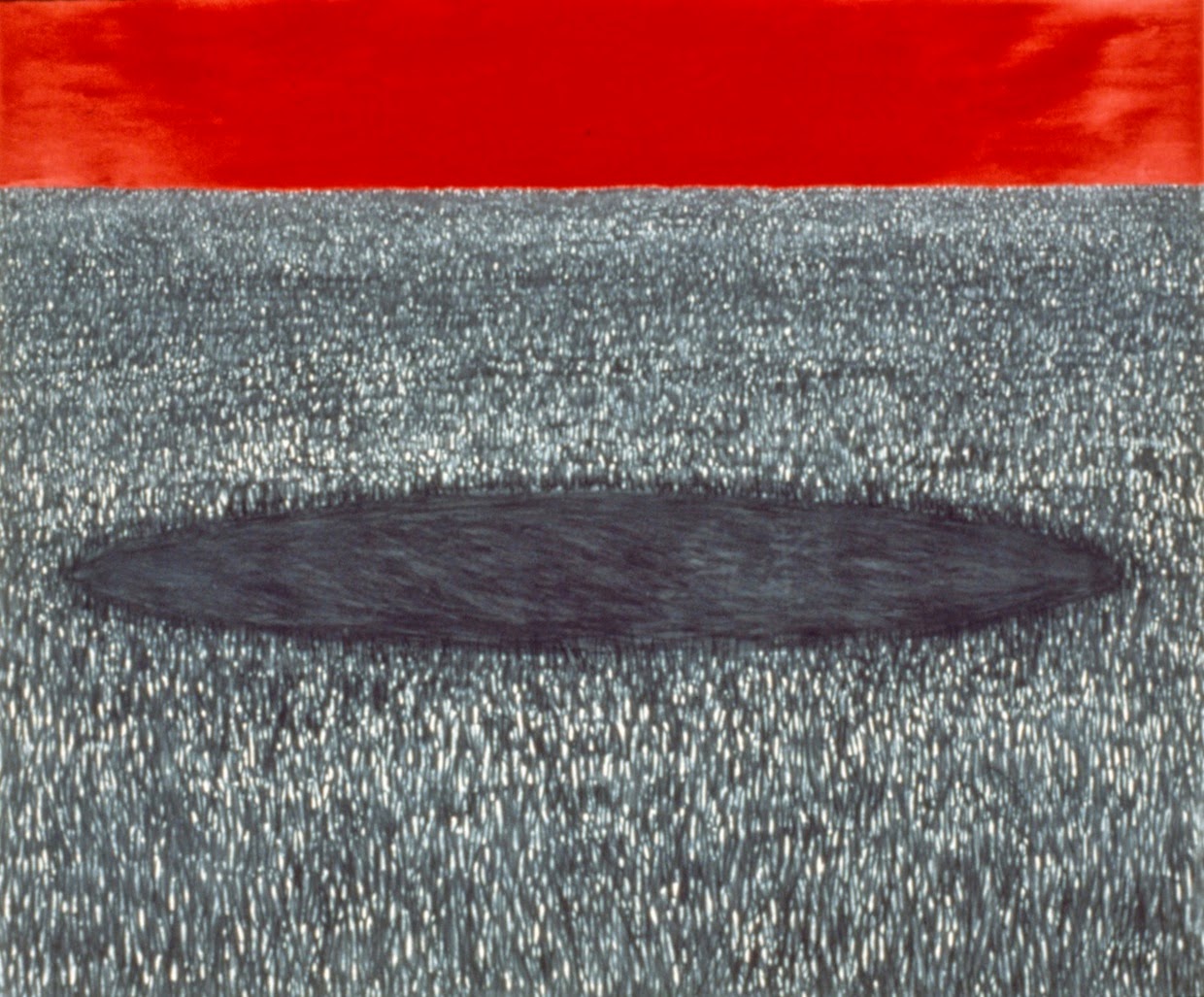 In 2000 I moved from landscape to explore a space defined only by shallow fields of color interacting with a screen of marks. Emptiness, ambiguity and spatial conjecture characterized these gestational works. (5-7) 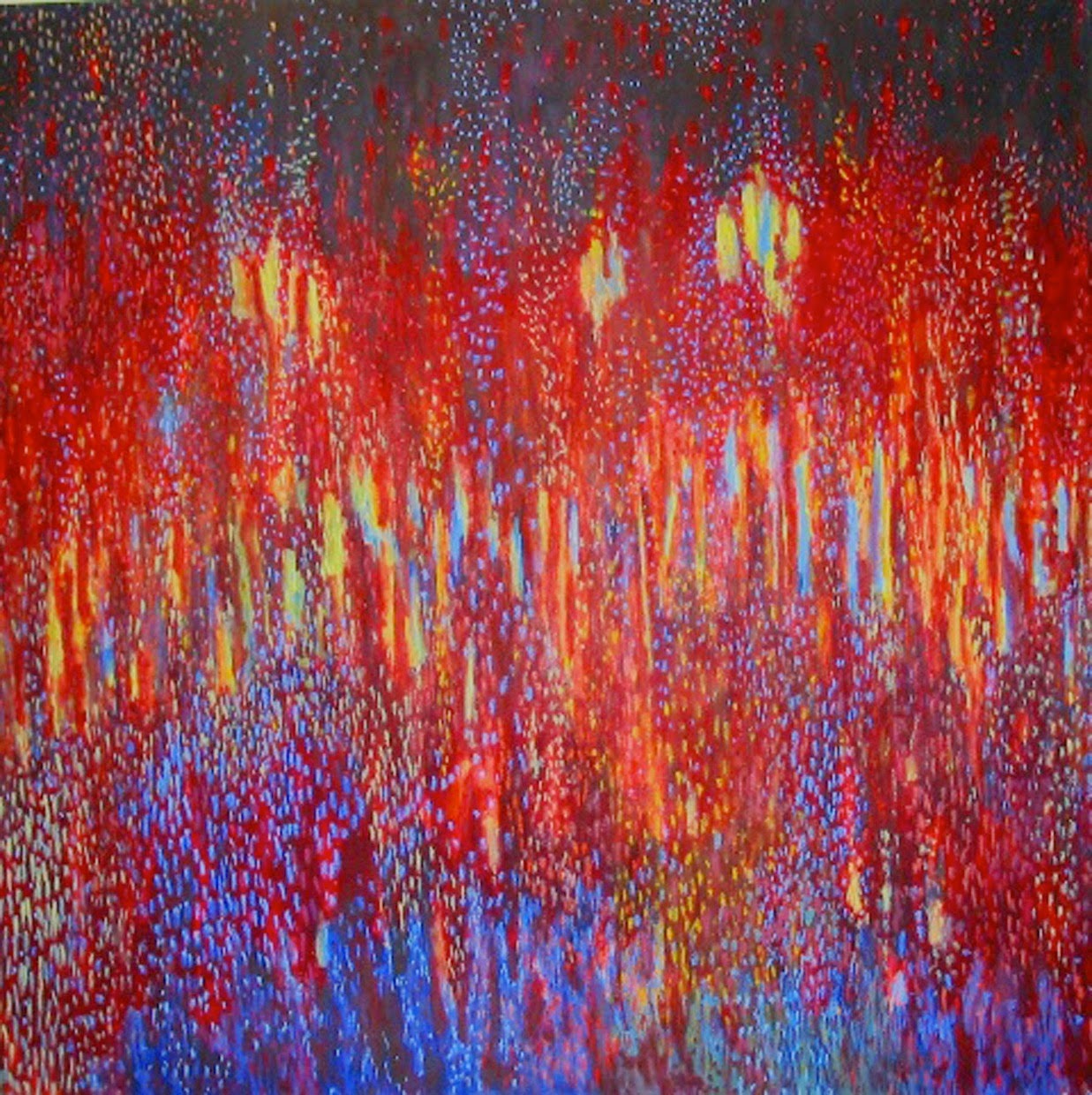 By 2007 I was making large-scale paintings crowded with colors that competed for attention. (8-9) The scale and congested compositions became overwhelming so I retreated to making small works. The smaller works from 2009- enabled me to define and understand the nature of the space I was seeking. (10-13) 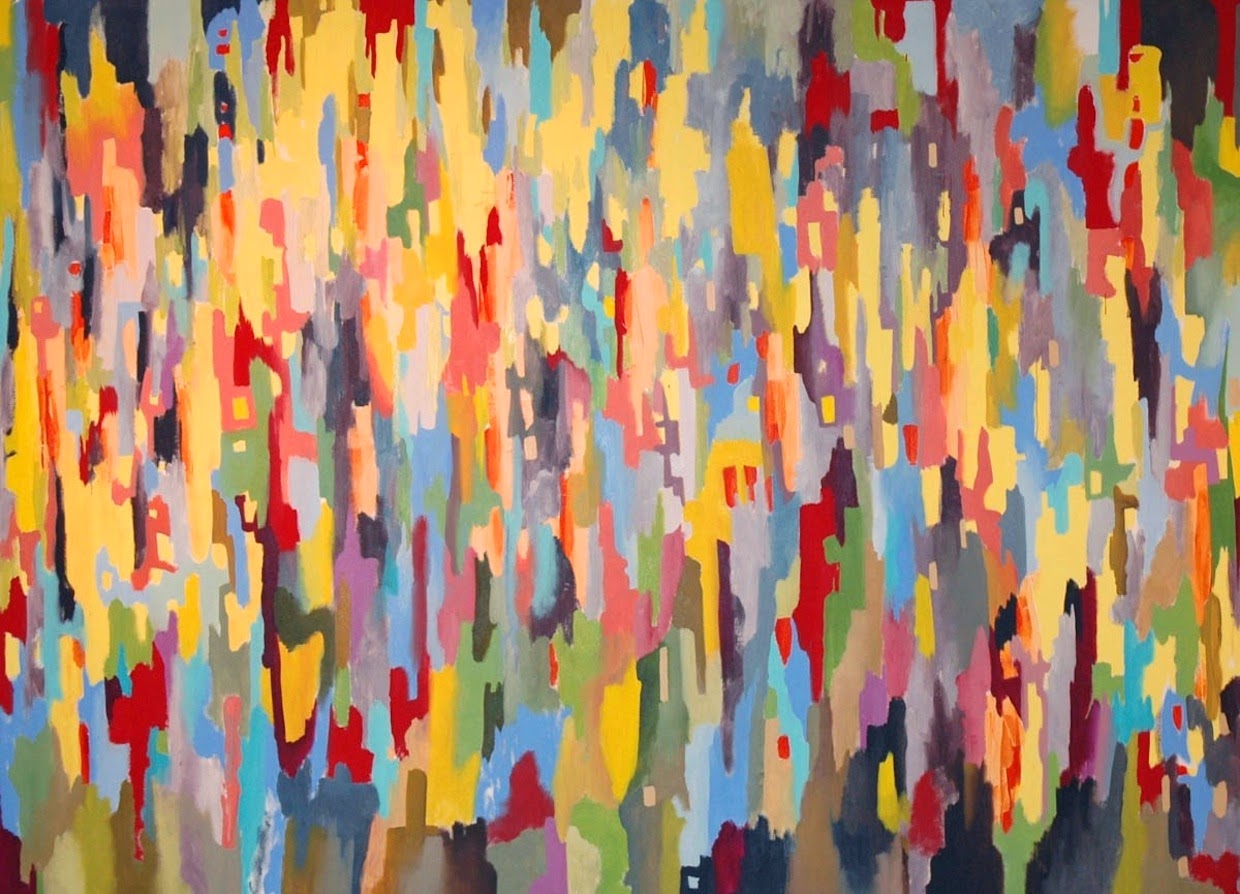 The new paintings trace the relational aspects of abstraction both across the surface and within a deeper space. Each painting contains a set of relationship that interact on a ground that advances or retreats in relation to the brush marks. I work to subvert expectations in a process that allows for a fluctuating reading of what I call an abstract narrative. The relational aspects function as a coming into being. (14-20)


I enrolled in the IGNITE course at C4 Atlanta so I am starting to think about my role as an entrepreneur   and an artist. I love the studio and have buried myself there for the past several years. Now it's time to get out and find out what it is I do, why I do it and how it connects to the larger world. So here is what I have discovered so far:


What do you do or make?

I make abstract paintings that combine the allure of color with an edginess expressed through the tension between the painted mark and its environment. The paintings explore the relationships between presence and absence, figure and ground, interruption and continuance and are suggestive of an abstract narrative.

What is the purpose of your work?

Where do you see yourself in the future?

My work will be seen in regional and national venues.
My paintings will become a brand.
Collectors will buy my work.
My work will be included in public art spaces.

My work proposes a new approach to painting by creating abstract narratives that address contemporary issues such as fragmentation and isolation,  With a highly skilled and intentional approach to painting technology, these works offer properties that are visually alluring yet challenge the viewer’s expectations of what constitutes painting.

Posted by Maggie at 2:01 PM No comments: